Vital Hand Tools For Your Boat

Every boat needs a good set of hand tools, and a box to carry them. What are the minimum tools you will need on the boat? If you have room for a more extensive tool collection, what should you include? 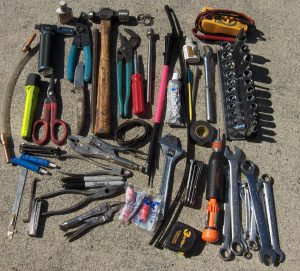 We will answer these questions after discussing the Physics involved with hand tools on boats. When we studied Physics in High School, Gravitational Force was well covered. Then our instructor broke his leg and we got a substitute teacher named Fred, who was a recovering commercial fisherman and had later gone into teaching. He explained that on board boats there is one additional force at work that occurs nowhere else in the Universe: He called it the Bilge Force. He explained that on boats the behavior of matter, the Laws of Physics, and even time itself appears to behave differently than on land. He warmed to the subject, “While gravity attracts everything, pulling it toward the center of the earth, the Bilge Force is selective and attracts only the things you need most, and pulls these items to the lowest, furthest, deepest, and darkest part of the bilge.” Fred also explained, “On land things fall straight down, but on a boat things fall diagonally, always toward the deepest part of the bilge water, and under the engine, just beyond arm’s reach.”
“The Bilge Force is always the strongest between 10:00 P.M. and 2:00 A.M. local time, when marine mechanics happen to be the weakest.” And, “Yes, the Bilge Force always works in local time.”

So, first on your list of boat tools is a strong magnet!

Must Haves
To get an idea of the basic tools you need, consider what you will find if you look inside your local marine mechanic’s toolbox, the one he or she packs up and down the dock:

-A strong extendable magnet!!
-Straight screwdriver
-Phillips screwdriver
-An 8” or 10” adjustable wrench
-Slip-joint pliers
-Water-pump pliers (also known as Channel-lock pliers)
-Feeler gauges up to .035”
-6” dial caliper with inside, outside, and depth measurement capabilities
-⅜” drive socket set with both metric and standard sockets
-½” drive socket set with both metric and standard sockets
-Straight tin snips
-Electrical terminal crimping pliers
-Side-cutter pliers, also known as diaonal cutters
-Needle-nose pliers
-Battery terminal cleaner
-24-ounce ball peen hammer
-Standard combination wrenches from ¼” inch to 1⅛”
-Metric combination wrenches from 8mm to 19mm
-Standard Allen wrench set
-Metric Allen wrench set
-Universal filter removal wrench
-Center punch
-Cold chisel
-Gasket scraper
-Vise-grip locking pliers
-Multi meter with volt, amp and ohm capability
-Thread-locking compound, known as Loc-tite
-Never-seize compound
-Electrical tape
-Pipe thread sealant
-Penetrating oil
All of this in a fairly weather-proof box that is shaped more like a tray, to help you quickly spot what you need. However, there are probably some additional hand tools you need on the boat that differ from those of the marine mechanic.
Would Haves
We’ll mention a few important additions to our basic list:
-Left Handed Twist Drills. Boat maintenance often includes removing broken bolts that still have part of the bolt stuck in a threaded hole. When drilling-out broken bolts with regular right-handed drills, the drill will often “catch” in the piece being drilled and turn the broken piece even deeper into the threaded hole in which it resides. To get around this problem, it helps to drill out broken bolts with left-handed bits. Then when the bit “catches” it will spin the broken piece out of its threads. Remember to spray the piece you are drilling with penetrating oil to improve the odds on removing the broken piece.
-Mechanical Fingers. When reaching deep into the bilge of a steel boat with a strong magnet, it seems that the magnet will stick to everything but the piece you are trying to pick up! Hand-operated mechanical fingers can be helpful at a time like this, and are readily available in most marine oriented hardware stores. The durable fingers of the tool are made of spring steel that can be straightened if accidentally bent.
-Internal Pipe Wrenches. When removing sections of threaded pipe it often happens that the pipe wrench jaws squeeze the end of the pipe out-of-round. To avoid crushing the pipe, you can insert any round object that happens to fit snugly into the opening of the pipe before using the external pipe wrench, or you can buy an internal pipe wrench. An internal pipe wrench grips the inside of the pipe and tries to expand the pipe rather than crushing it as you tighten or loosen the section of pipe.
Crow-Foot Wrenches. For removing or replacing nuts that have a fuel or hydraulic line coming through the center of the nut, nothing works better than a crow-foot wrench. It can also be attached to a torque wrench for doing fine work.
-Infra-Red Thermometer. The ability to quickly measure the temperature of engine and machinery is very important at times, such as when an engine is overheating. An infrared thermometer senses temperature over distance and provides a gauge on the rear of the gun for a temperature read-out. The tool even has a gun sight or a laser for aiming the gun at what you want to check.
-32 Volt Test Light. Testing a D.C. electrical system for voltage is often an important task and can be done quickly with a test light instead of a multi meter. This tool is handy because you can carry it in a shirt pocket and it will let you check for the presence of any voltage up to 32 volts with the same bulb. To get one, buy a 12 volt test light and then replace the bulb with a 32 volt bulb.
(Some of this material excerpted from “PRACTICAL BOAT MECHANICS”, by Ben L. Evridge, to be published this fall.)

Send your suggestions and we’ll add them to the list!