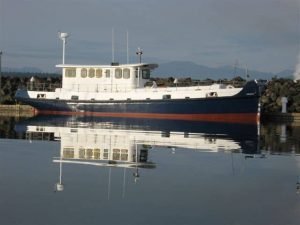 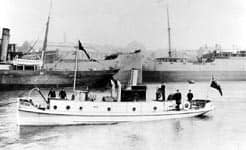 Malcolm’s Grandfather, FT Harker founded the family business in 1878 in England and began designing and producing steam engines. He and later his three sons continued building their steam engines up until 1950, and in later years built heavy machinery under contract.

However, in the early 1900’s steam engine builders specified the hulls into which their steam engines went. This resulted in the company commissioning the building of the Fire King to fill the contract for the fire watch boat and then powering of the boat with a pair of their own steam engines.

The vessel originally carried 8 tons of water and 2 tons of coal. Rough estimates show this amount of coal was “topped-off” regularly to keep the boat able to maneuver and pump water for a forty-eight hour period, should a large fire occur.

It is interesting to note that historical records show the price of coal that year in Seattle was $5-6 per ton. The same records show the average miner (in an open pit setting) could mine and load 2.67 tons of coal per day! 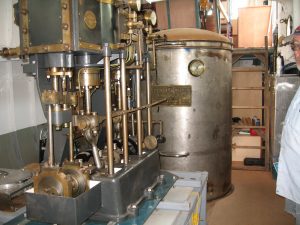 The original pair of Harker steam engines turned twin 4′  bronze propellers and probably pushed the boat at between 5-7 knots. Malcolm estimates that each of the original steam engines could have produced 35-40 horsepower.

Today it is hard to imagine spinning four-foot diameter propellers with so little horsepower-and yet, this example illustrates one tremendous advantage of steam power: That is, the maximum torque produced by a steam engine occurs at a stall, or zero RPM, and rapidly falls off as the speed increases.

The S.S. Fire King and its sister vessel the S.S. Fire Queen remained in service for over fifty years, after which the Queen was scrapped. The King, however, was left derelict for over twenty years before being purchased and converted to a live-aboard with a large sailing rig. Even later it was fitted with twin WWII vintage 6-71 Detroit Diesel Gray Marine engines.

In due time Malcolm discovered the boat and decided to refurbish and re-power the boat as a seaworthy live-aboard. Later, to his surprise, he discovered the original drawings his Grandfather had done when designing the vessel!

He began by removing all old equipment and spent many hours cleaning the boat. The two new John Deere 4045 Marine Diesel engines were supplied by MER Equipment and the installation along with other extensive upgrades were done by Townsend Bay Marine.

Malcolm found a similar, and slightly smaller Harker steam engine for historical display purposes and bolted it down in the forward part of the boat on the lower level.

Looking from the front of the steam engine, there appears to be a beautiful stainless steel boiler behind the engine. It’s surprising though, as you walk back through the boats lower level, to turn around and find the boiler is really a cleverly disguised  “head”, complete with a shower!

In the stern, on the lower level you pass through a seeming time warp, cleverly disguised as hatch door: Stepping through the hatch takes you through a hundred years of time and into a modern, gleaming white  engine room, complete with the two new John Deere Powertech 4045 diesel engines. 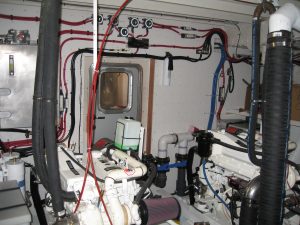 And how do the new John Deere Diesels look compared to the original Harker Steam Engines?

In just a few words: Cool, clean, quiet and convenient!

Depending on the BTU of the coal used, it appears that 2000 pounds of coal has less energy than 90 gallons of No.2 diesel fuel!