The Life & Times of Ivan Fox 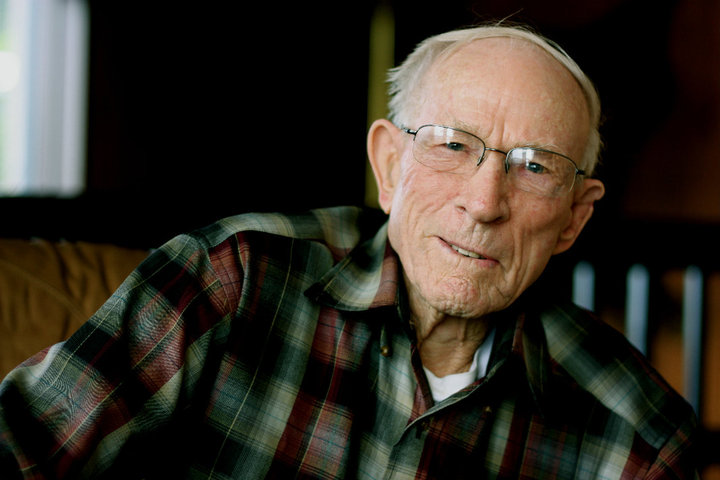 Born in Prosser, WA. Nov. 14th, 1918, Ivan was the second eldest of eight children born of William and Dolly Fox. Ivan labored in the Three Cs out of High School to help support the family after the great depression. He was good with a baseball and enjoyed extra privileges because of his talents on the field. He rode a Harley back in those days but had to hide it in the woods so his mother wouldn’t find out.

In 1940 he lost his father to a heart attack, and in 1941 he and his brother rode a steamship to Kodiak where they lived in a one room unheated cabin with 4 guys working for the Navy building concrete bunkers on the island in preparation for a suspected Japanese invasion. He sent the majority of his earnings home to support his mother and siblings during trying times at home.

In the spring of 1943, he came home to join the navy, because the war was on, but was rejected for combat duty because of a defective right foot. He went to work at the Navy base in Bremerton for a brief time with his brother Dean. Dean had a friend at the San Juan Fishing and Packing Co. who had told him they were hiring. They took the ferry over to Seattle, walked to the office at pier 31, and got hired on. They went north together on the power scow M/V Viekoda, with Captain John Spailin. When they got to Kodiak Dean was put on the power scow Malina, as a deckhand. Ivan was put on the San Antonio, a 70-foot wooden tender, with a 50 hp Atlas engine. Ivan spent the summer on the 6 Knt. San Antonio as a mate/deckhand buying salmon around the Island for San Juan.

In the fall of 1943 after returning from AK, Ivan attended the Commercial Marine School on Catalina Island. After graduation he joined the Maritime Service (Merchant Marines) and shipped out to the South Pacific on tankers, to supply fuel to the Pacific Fleet fighting the war. He volunteered for tanker duty as able-bodied seaman on a floating bomb because they were paying an extra $10 a month and it allowed him to send more money home to his mother and siblings.

In the spring of 1944, he went back to Kodiak this time fishing salmon around the island with Bill Pikus. Back in the day when men were men and women were too. Ivan’s job was rowing the seine skiff, holding a set by hand before they had outboard motors.

In May 1945, he checked in with George King, Superintendent, of San Juan Fishing and Packing Co. George made him skipper of the San Antonio, the tender he had mated on in 43. The summers of 1945-46 he ran the San Antonio out of Uganik Bay buying fish for San Juan Packing. In the fall of 1946, the bookkeeper quit, right in the middle of paying off the crews. George, desperate for help, gave Ivan the job of cannery bookkeeper. Thus beginning his illustrious career in the salmon processing industry.

Ivan met Lillian “Jody” Joten in Ballard. They were married in Oct. of 1951 and were constant companions until the end.  For 40 years Jody and Ivan traveled together to Kodiak where they spent their summers in Uganik Bay with their three children, Christy, Mike, and Steve, together with a long succession of Beagles. The cannery changed hands from San Juan, then owned by the Calvert family, to Wiz Fish a subsidiary of New England Fish Co. Ivan remained over the years as a permanent fixture in his little house on the point, with his beloved “Port O’Brien.

Over his 40 year career with NEFCO he was eventually responsible for salmon price negotiations with the fisherman’s unions across the state of Alaska.  When NEFCO went out of business in 1980 his cannery in Uganik was leased to SeaAlaska Native Corp. owner of Ocean Beauty Seafoods. Ivan was hired to manage the Uganik plant and the three Bristol Bay canneries they bought from the NEFCO trustee, Sam Rubenstein.   His second retirement was from Ocean Beauty when they sold the plant in Kodiak to a fisherman’s co-op put together by Olie Harder.   Olie wanted Ivan to stay on in Uganik but Ivan decided to make a new summer home in Egegik where he managed the Bristol Bay fleet for Nelson Brothers (NELBRO) who had purchased the cannery from SeaAlaska. He stayed on with NELBRO (later Alaska General Seafood’s) to manage their 3 plants and fishing fleet from his new summer home in Egegik.  He again negotiated fish prices with the fleet and managed the tenders across the Bay.

In 1964 he and Jody, together with the Uganik Port Engineer Larry Schusted, founded an engine service business on Ballard Ave. They felt the company was needed to support the fishing fleet in Alaska when it was difficult to get service from the lower 48 during the short summer fishing seasons.

They bought the Chinese laundry on Ballard Ave for $15,000. (Before that it had been the Star Bar). And today is the home of Doc Street Brokers. The name of the little start-up was chosen when Ivan went to get a phone. The phone company told him they had to have a name to go with the number and Marine Engine Repair Co. was born. The Company name was later shortened to MER as they broadened their product line to customizing propulsion engines and building customized generators for the fishing fleet. Ivan and Jody turned the company over to their son Mike, and Son in Law, Bob Allen in 1980. They are today a third generation family business carrying on Ivan’s legacy of service to the workboat industry.

Ivan loved his work in the fishing industry so much he retired three times before it finally stuck.  It is commonly said in Kodiak, that Ivan Fox invented Salmon.  He was fondly known as Ivan Fish of The New England Fox Company (NEFCO) where he was the VP of Operations and superintendent of their 6 processing plants in Alaska.  He witnessed the rise and fall of Salmon Traps.  He was there when Alaska became the 49th state in the union and helped build the first salmon seine fleet and set gillnet fleets on the Island before statehood.

Ivan was known as a tough negotiator but always respected for his fair bargaining practice.  He mentored many of the top seafood plant managers in the state today and was instrumental in lending money and a helping hand to some of the top fishermen in the state getting them their first foot up in the business.  He will be sorely missed by the processing community and the salmon fishing fleet alike.

Ivan had a great love of cooking, gardening, travel, family, and Beagles.  He never made it to Antarctica, about the only place on the planet he and Jody hadn’t made time to visit.  Ivan was a natural negotiator; he had an uncanny ability to cut directly to the heart of any disagreement to propose a fair compromise that could be embraced by both sides.   He was successful in business, yet never compromised his integrity for advantage.  His word was his bond, his handshake sealed many a million dollar contract over a bar napkin.  He liked cheap beer and loved to share it. He was generous to a fault never embracing the frills of success, more comfortable with the joy of giving than receiving.  Ivan was always game for a friendly wager, one of his many ways of showing affection.  He said playing poker with a man for a few hours will tell you more about his character than any other measure. He loved to play cribbage, particularly over a brandy, keeping one eye on the pressure cooker canning salmon or clams on the porch in Uganik. He was a compassionate man with a quick wit and uncanny memory for all the people and events that made up his long and illustrious career.  He was truly a legend in his time, admired and respected by all who had the pleasure of his acquaintance.

He is survived by his wife and love of 61 years, Lillian “Jody” Fox, his three children Christy and her husband Robert Allen, Mike Fox and his fiancé Judy Simon, & Steve Fox, grandchildren Tyler Allen and his wife Rachel, Ashley Allen, Chelsea, Savannah, and Sean Fox, great grandchildren Ivan & Evelyn Allen, his youngest brother Mel Fox, Beagle Molly, his MER family, and many “adopted” sons and daughters.  He will be missed by all who knew and loved him.  At Ivan’s request, in lieu of flowers, please make a donation to your local Salvation Army or the Seattle Fisherman’s Memorial in his name.

Ivan’s principles, his compassion, and his work ethic live on in the daily lives of those of us left behind to carry his torch, to tell his stories, and honor his legacy.