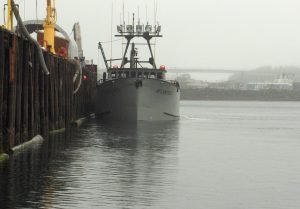 If we could look inside a marine engine and watch what’s happening during the first ten seconds of a cold start, we might be surprised!

Over the life of an engine, eighty percent of the wear to engine bearings will take place as the engine begins to turn without lubrication, during cold starting.

When an engine is turned off, the lubricating oil slowly leaks from between the components that depend on the oil film and its wedge-effect. The oil wedge-effect is present when engine components are separated by lubricating oil, and there is sliding or rotational movement. However, when oil pressure ceases and the engine sits still for a little while, large pockets of air enter the lubrication system. This air must be eliminated by oil pressure once the engine starts. As the engine begins to turn, the oil pump quickly lifts a column of oil from the oil pan and goes about forcing all the air from the lubrication system.

When a 12-volt starter motor begins cranking a cold diesel engine-in the 300 horsepower range, voltage at the starter can drop from 13.8 volts to only 11. Amperage can go from zero to well over 1000 amps in an instant. The affects of the sudden electro-magnetic field around the starter cables may make them jump or seem to “crawl”.

The fuel system quickly begins to build high pressure for injection into the cylinders. The injectors begin forcing fuel into each cylinder; one at a time, in the engine’s firing order. Smoothly carried forward by heavy flywheel that keeps the crankshaft rolling on to the next cylinder in the firing order, and the next and the next…

Many mechanical governors go into the full fuel mode when the engine is off. This happens so the injectors will have a real “kick” for starting the engine. These same engines, equipped with a mechanical variable timing unit will also keep the engine injection timing fully retarded to aid starting. When the engine starts turning, each injector will be putting in near their full volume capability until the engine speed gets up to the governor’s pre-set low idle speed. At which point, the governor will quickly feather back the fuel delivery to maintain a steady low idle speed.

When the oil pressure comes, the crankshaft and the flywheel quickly rise to the center of their bores in the cylinder block and flywheel housing, both lifted and supported by the oil wedge. The oil wedge acts between the crankshaft journals and the engine bearings. It would not be far-fetched to say the crankshaft is “surfing” on a film of oil, at this point.

If the crankshaft main bearings have five thousands (.005”) of an inch oil clearance, then the presence of lube oil lifts the crankshaft and related components nearly half this distance, or approximately .0025”of an inch, to the center of their bore. This weight can be the several hundred pounds of steel and cast iron that the crank and flywheel consist of. If the engine has a front mounted power-take-off clutch, the oil film must lift this additional weight as well. On larger engines this total weight can exceed a thousand pounds.

The cold and dense column of air in the exhaust system begins to move, slowly at first, like molasses, as the engine turns and starts. The 400 degree F gases that are clamoring to work their way out from below have a much easier time flowing in, around and through the exhaust system. As the exhaust gases warm they expand, losing density, becoming much easier to pump up the stack.

The oil pump for the marine gear turns any time the engine crankshaft turns. Therefore, as the engine begins to fire, it must overcome the increasing power demand from driving all the so-called parasitic loads.

Parasitic loads are those loads (or work) that must happen in order for the engine and marine gear to run properly.

Suddenly, there is a demand for fresh air in the engine room, and lots of it, as all cylinders begin to fire!

We’ll let it warm up, and then it’s time to go fishing…

(Some of this material excerpted from “PRACTICAL BOAT MECHANICS”, by Ben L. Evridge, to be published this fall.) 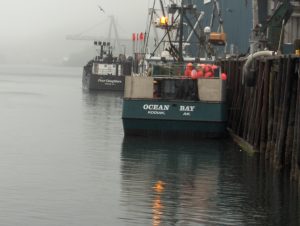