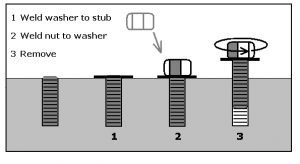 1. Removing Broken steel engine exhaust bolts or studs that are broken off in a blind hole: If possible, start the engine and get it up to operating temperature, then turn it off immediately and disassemble as necessary to the point where penetrating oil or even candle wax can be dripped on the exposed threads of the exhaust bolt or on the bolt stub. The oil/wax will find its way along the bolt threads. If there is a stub sticking out, an effort must be made to grab it with Vise-Grip locking pliers. If it can’t be gripped, try to carefully turn it out of the hole with a hammer and chisel. A bolt remnant that has broken off flush or below the surface of the work piece will usually be loose in the threads. In such a case, it often works to carefully use a punch or chisel and drive on the outer perimeter of the bolt to turn it counterclockwise.

If these efforts fail then it is a good idea to first weld a washer onto the stub, and then weld a nut to the washer. Next, attempt to turn the stub out by the nut that was just welded.

If this won’t move it, use a left-handed drill bit to drill a hole in the bolt so that an Easy-Out may be driven into the freshly drilled hole to remove the bolt. Just starting to drill a broken stud with a left-handed bit will typically be enough to turn the bolt out of the threads. 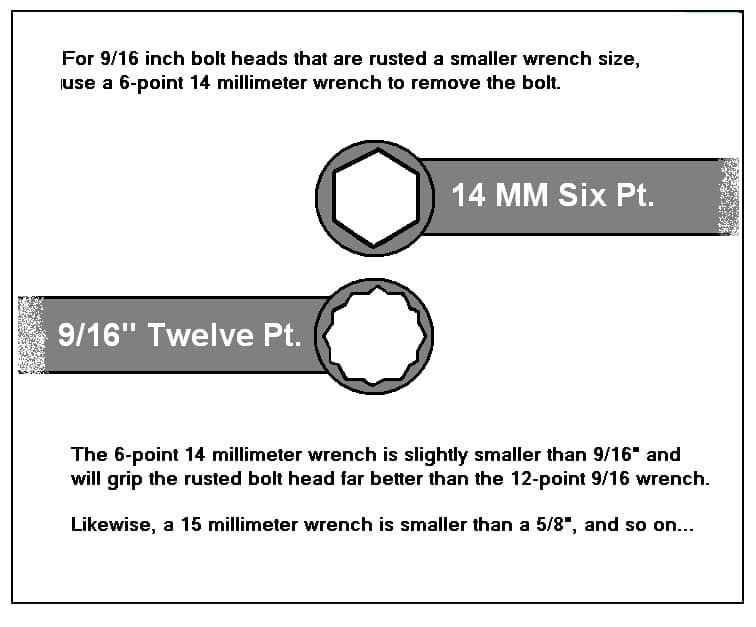 A six-point wrench will grip a worn bolt head

2. …. a rounded-off bolt head or a head that has rusted away: First, try an undersized 6-point box-end wrench as shown. If this does not work, dress off the rounded head and press or drive a larger nut over the head of the bolt, then weld the larger nut to the bolt head. 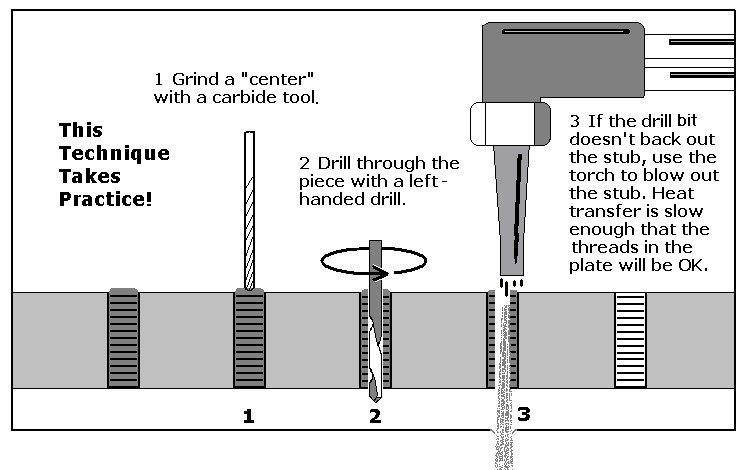 3. …. a bolt used for through-bolting is broken-off: If the back of the bolt can be accessed, it can sometimes be turned by gripping with pliers after treating it with candle wax or penetrating oil. 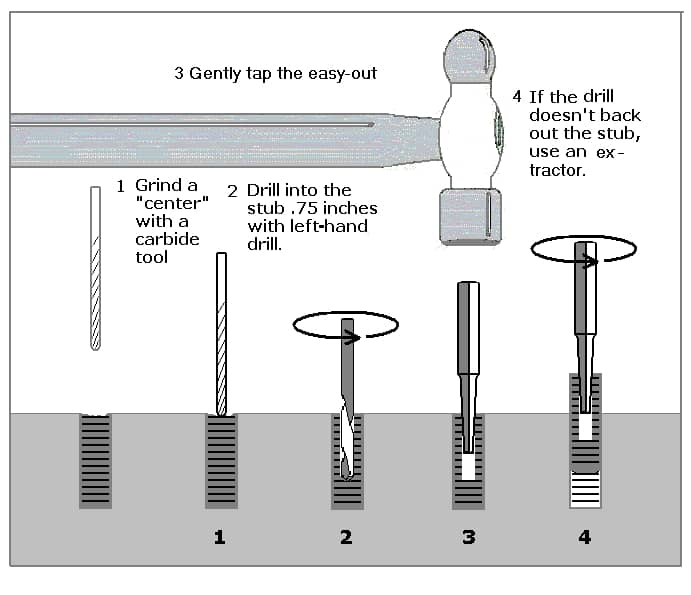 4. …. a threaded bolt used for through-bolting is broken off, but not in a blind hole: A broken threaded bolt in this state can, with practice and skill, be blown out with a cutting torch, leaving the threads undamaged. After the bolt is blown out, use a thread tap to clean the holes.

5. …. a threaded bolt or stud is broken off above-flush (i.e., standing proud) in a blind hole: To drill out the broken bolt, first grind a center in it, and then proceed as in the accompanying illustration above.

6. …. a threaded bolt or stud is broken off below-flush in a blind hole: Probe gently with an ice pick to determine if the broken piece is locked in place or if it appears to wiggle. If it moves easily, this is a good sign. Grind a center in the broken bolt if it is to be drilled out, and begin drilling with a left-handed drill bit; it may spin right out of the hole. 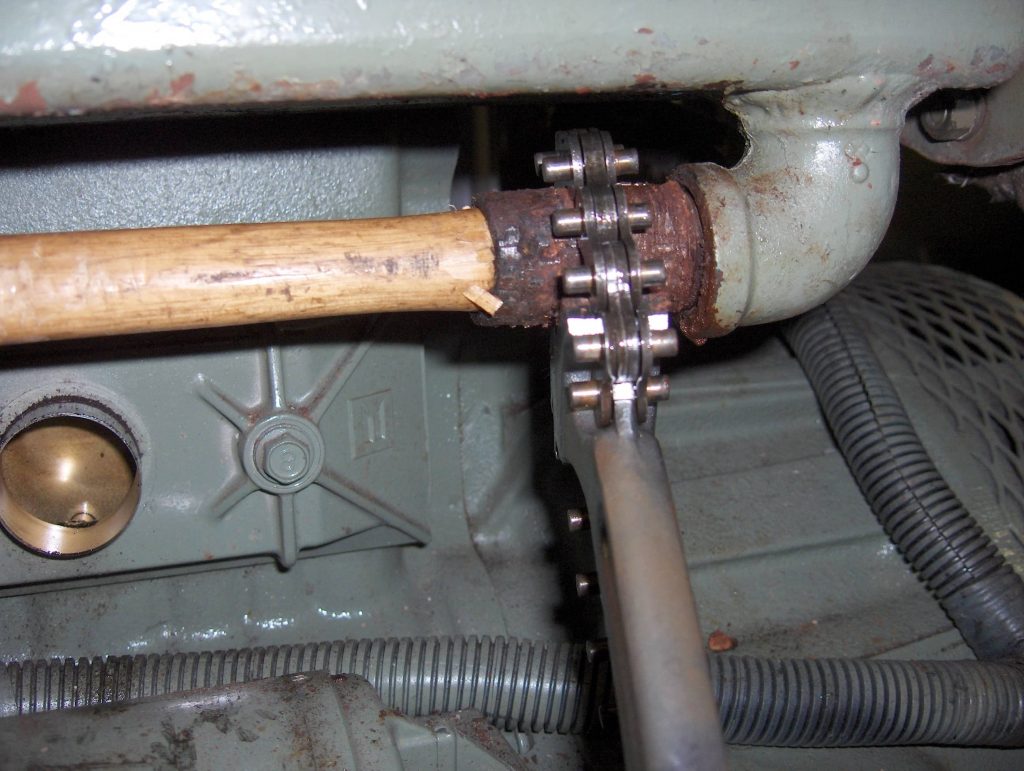 Drive in a piece of wood to prevent nipple collapse.

8. …. a pipe nipple is to be removed: The nipple will sometimes collapse under the jaw pressure of a conventional external pipe wrench, especially if it is thin-walled. To prevent this, insert a solid, snug-fitting object into the nipple before using the pipe wrench. Even a piece of wood can be driven inside the pipe. 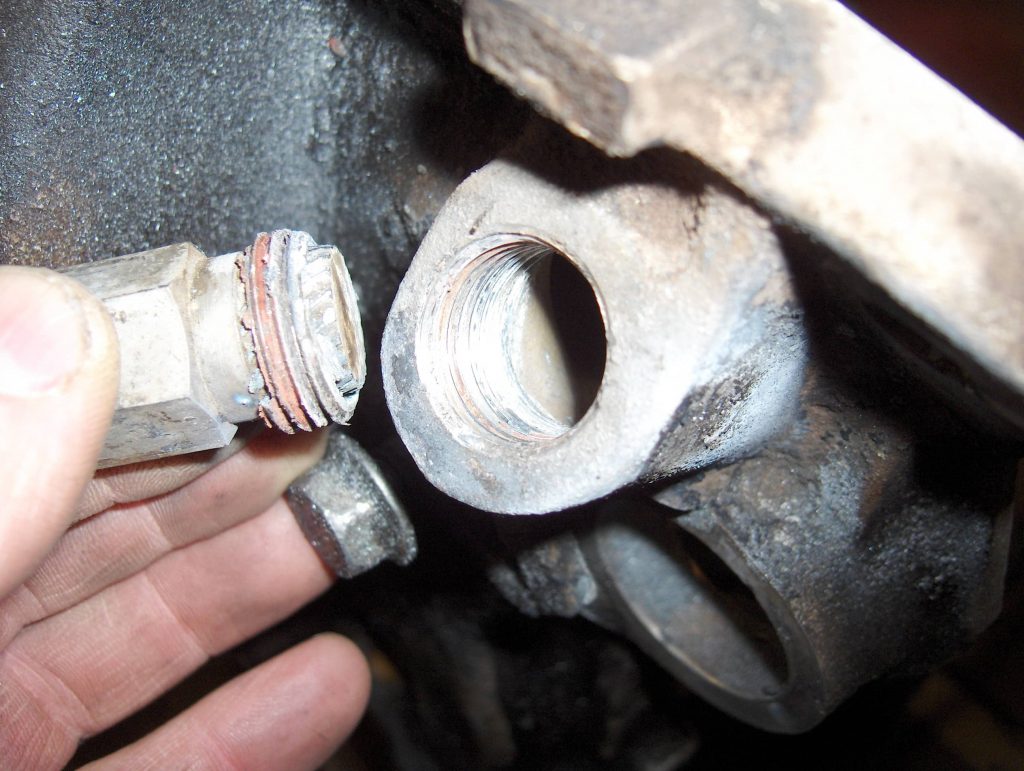 Use a fitting extractor to remove broken fittings.

9. …. a threaded steel (gray or bright metal) or aluminum fitting is broken off in a blind hole: Use an internal pipe wrench to remove a larger broken fitting, and an Easy-Out style extractor to remove a smaller one. In the accompanying photo an aluminum coolant pipe was broken off in an aluminum intake manifold. A large diameter extractor was first driven into the broken-off stub of threaded aluminum tubing. Then the threaded boss in the manifold was heated to expand the metal around the broken fitting, and finally the broken remnant was turned counterclockwise and removed. (Excerpt from “PRACTICAL BOAT MECHANICS” to be published this fall.)

(Some of this material excerpted from “PRACTICAL BOAT MECHANICS”, by Ben L. Evridge, to be published this fall.)