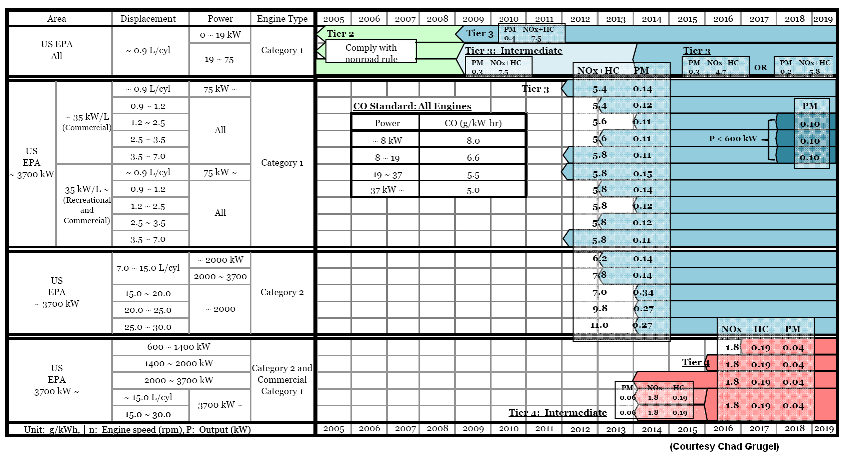 Your Boat and the EPA
MER follows Environmental Protection Agency requirements carefully and we are seeing up to 80% reductions in marine exhaust emissions between circa 1985 engines and the newest EPA certified engines. However, it will be some time before all of the old engines are replaced, simply because the replacement will take place only after rebuilding the old engines is no longer practical.

The EPA calls marine diesel engines “Compression Ignition Marine Engines”. They estimate the number of non-road engines in use worldwide is in the millions, and expect this number of engines, through turnover, to produce near-zero emissions by 2030.

Due to the complexity of this subject, our discussion will cover only the United States EPA standards that apply to compression ignition marine (diesel) engines. The goal of this layman’s introduction is to understand how to use the chart in Fig. 1 above. Near the end of the article, we’ll use this same format to calculate the emissions from a marine diesel engine.

First, just a little history: The political battle over whether to address air quality or not, raged for decades. Finally, in the 1960’s it was actually public concern about water pollution that became the springboard for the creation of the EPA. How to address engine air pollution was the next hurdle. To summarize the process; consider that between this paragraph and the next, many years, careers and billions of dollars were spent as the process lurched forward.

Eventually, the EPA identified harmful compounds in the exhaust as either 1-Particulate Matter or “PM” (harmful solids, or “soot” in the exhaust), and 2-Harmful gases, mainly Oxides of Nitrogen or “NOX”, Hydro Carbon or “HC”, and finally Carbon monoxide (CO).

However, before progress could be made on reducing pollutant levels, the EPA had to mandate the phasing in of fuel that was complementary to the exhaust gas clean-up process (Figure 2). Ultra-Low Sulfur diesel fuel put emission compliance within the reach of engine designers. First, all on-highway gas and diesel engines were required to meet the EPA standards, followed by non-road and marine engines. While Non-road engines were late to the party, once started they had a much tighter time frame. 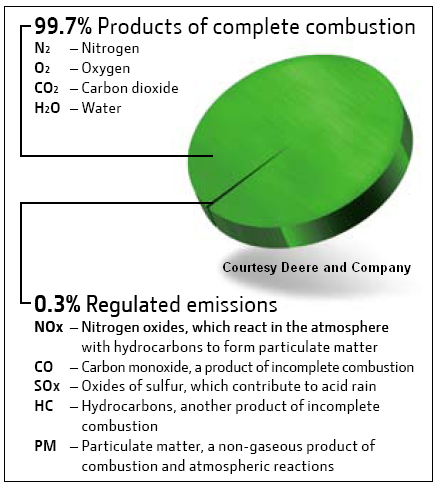 The results:
Comparing two 300 horsepower engines; the first, built twenty years ago and the second, a current tier 3 engine: Over their lifespan, the new engines will produce approximately 80% fewer exhaust pollutants.

As we read about air quality, a new word begins appearing alongside of the regulated exhaust emissions, and that is “ozone”, specifically ground level ozone. NOx is the precursor to ground level ozone, also known as “bad ozone”.

Good ozone, on the other hand, is very beneficial when found in the upper atmosphere. Much of the good news on air quality is that reducing NOx from diesel exhaust also reduces ground level ozone. Not only that but cleaning up the air also improves water quality. The emission reduction efforts made so far are a constructive beginning. However, it will be sometime before large improvements in locomotive and large ocean-going vessels pull their weight in contributing to the improvement. Why the delay? One reason is simply that Ultra Low Sulfur Fuel requirements have been very slow coming for these large, slow-turning engines. And then there’s the ever present political/legal wrangling going on behind the scenes.

There is a lot more to diesel engine exhaust than we’ve discussed so far. As Figure 3 illustrates, 99.7% of exhaust gas from current engines is relatively clean. It is the remaining 0.3% that is of concern. Of the nearly 40 components in diesel exhaust, water is the most innocent. The majority of the remaining items are bad actors. Fortunately, many of these are combined as the engine operates, to make up the particulate matter (soot) of the exhaust.  Nearly half of the remaining components are gases, and of these, the EPA regulations apply to mainly NOX, CO and HC for now. The graph shown here includes carbon monoxide (CO), although many graphs do not. There is a CO level requirement in place for all marine engines. It happens that levels of CO are low when current engines are within the manufacturer’s specifications. There are still many, old technology diesel smoking away in our waterways. However, the new engines that eventually replace them will pollute far less than the old engines.

Calculating Engine Emissions
For the curious, it’s not difficult to calculate the number of pollutants produced as a marine engine operates. The graph used in Figure 4 is accurate, however, few graphs depicting EPA emission requirements can be trusted. Here are a few things to watch:
1-Emission graphs often mix both on-highway and non-road requirements & schedules.
2-Several horsepower categories have differing regulations.
3-Lower power engines are allowed to produce more pollutants than larger engines.
4-However, there are overlapping calendar schedules that require the lower power engines to comply earlier, while allowing larger engines more time to meet more stringent requirements. 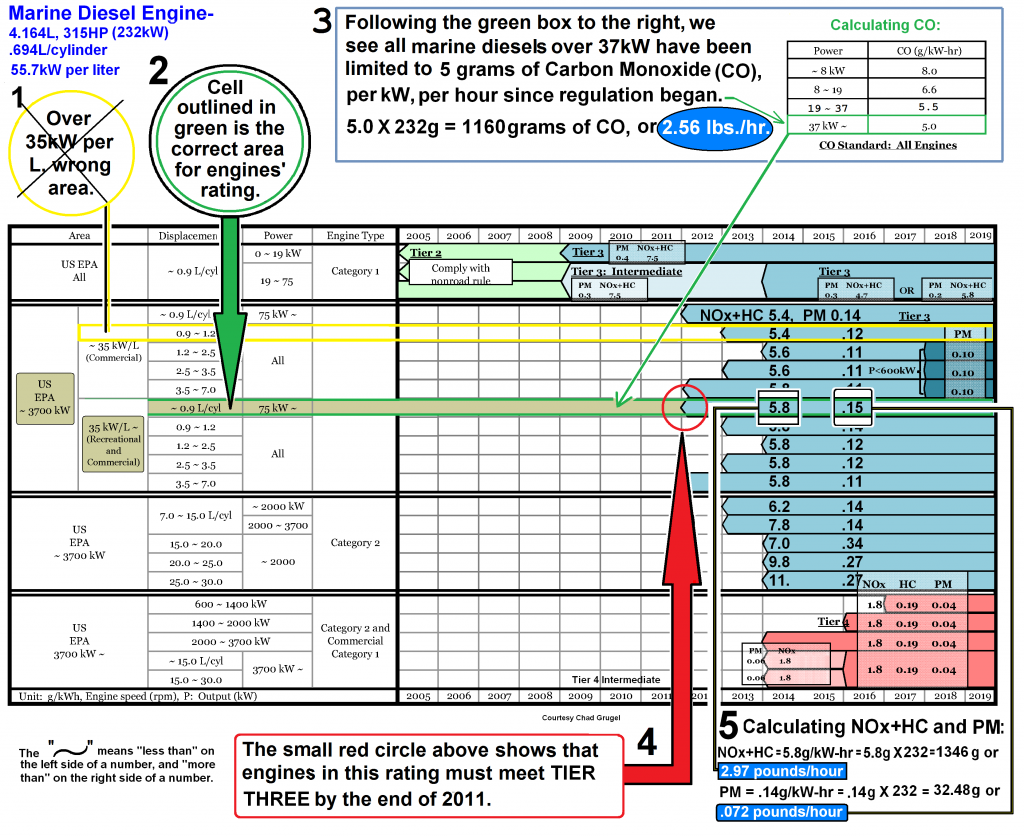 Packaging and Certification
After the political, economic and scientific accomplishments discussed above, it was time to get down to the nuts and bolts. The marine engines next needed to be applied (installed) to not only satisfy the customer’s needs but also to comply with the EPA. This was complicated by the packaging requirements of the applications. Most emission compliant marine engines just need more space. These engines include propulsion engines, generator sets, and also hydraulic power units, and they must still provide good access for service. One example of a packaging challenge is the extra space taken for the air-to-air after-cooler which many engines need to meet EPA air quality standards. Another is sound enclosures surrounding marine generator sets: they must contain more equipment per kW rating, and still fit into boats built before the new regulations.

The wide range of engine sizes, power ratings, and packaging constraints make it difficult to certify them because the engine emission levels must be tested and certified in the engines’ eventual working conditions.

To summarize: The tremendous cost of research and development to meet emission targets has resulted in somewhat more expensive engines. However, much more powerful electronic management of marine engines has maintained power levels, fuel economy, and dependability. 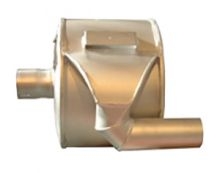 MER-COWL Exhaust Silencers
Cowl silencers turn obnoxious sound waves into heat and route the heat out with the exhaust gases. Available in many configurations and grades, the silencers are unsurpassed for sound attenuation. Contact Bob or Norm at 800-777-0714 to order yours. 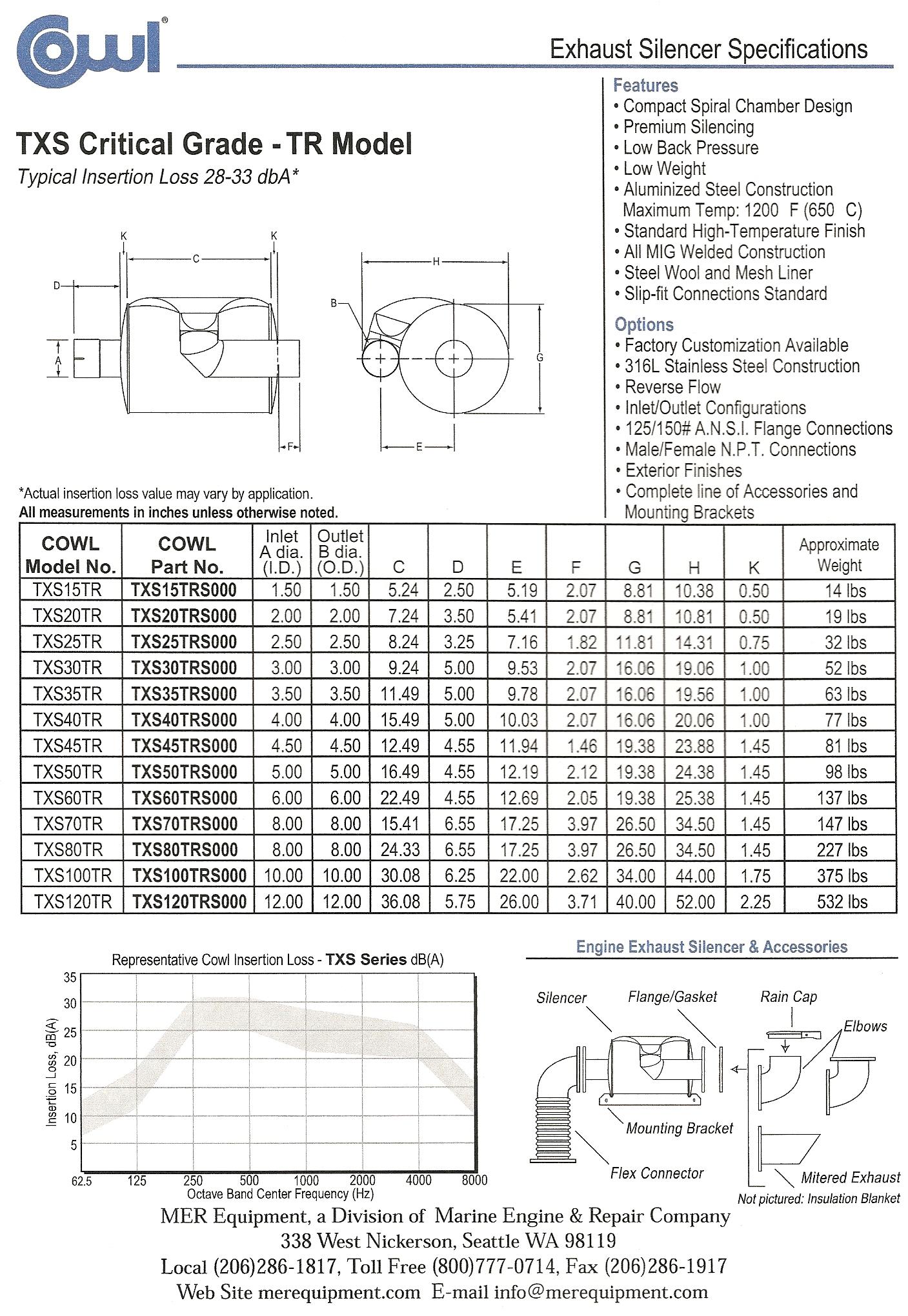 When Stewart Everest of Everest Marine & Ian Jefferds of Penn Cove Shellfish designed their 4th shellfish-harvesting vessel, the 63-ft Mytilus, they again specified JOHN DEERE engines from MER Equipment. The original plans called for a wet-exhaust system to exit the stern, but Stew was very concerned about reducing exhaust noise for the sake of the crew as well as those on shore, often operating near populated shorelines.

MER President Bob Allen persuaded Stew to instead go with a specially configured dry-exhaust system exiting through a vertical stack. Stew was concerned about added weight high-up on the boat.” “However, after the marine architect stability was very good, we took Bob’s advice & went for the vertical stacks.”

Bob’s plan called for wrapped Cowl silencers in the engine room with 5-in.-diameter openings in & out, adding two 5-in., 90º elbows 3 feet downstream of the Cowl silencer to further absorb sound. Finally, near the far extremity of the 20-ft system just 6 feet from the end, they installed EM critical-grade in-line silencers with 5-in.-openings, exiting with 6-in. pipe. It’s worth mentioning that Cowl & EM both make air-intake silencers for installing on an engine’s air-intake side, which can really make a difference in the engine-room noise level.

Stew says he always lines enclosures housing the exhaust components with Barrier 104—his favorite sound-attenuation product—in either 3/4” or 11/4” thicknesses.

When starting the engines Stew found the silence was … deafening! With the mussel-processing deck directly above the engine room, Stew wanted to keep the work area very quiet. Going with the vertical exhaust rather than the original wet exhaust meant two stacks with outlets above the top house. The black EM-silencer house out of the weather. Stewart put sound-deadening material in these cavities where the EM silencers were fitted.

“I wouldn’t have thought engines could be this quiet!” Stew Everest, Everest Marine MER’s Cowl-EM silencers on the latest mussel harvester in the Penn Cove Shellfish fleet. All 4 powered by MER JOHN DEERES, the first 3 have 6081s, this one–twin 6068s “We had to turn off the radios in the wheelhouse to hear if the engines were running.” Penn Cove Shellfish owner Ian Jefferds, says, “Running DEERES with MER’s exhaust system, the sound reduction far exceeded our expectations.”