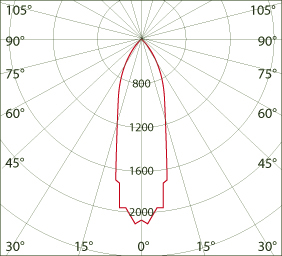 Clients often ask about the beam angles on our SeaFire lights and how much coverage and distance each will provide. Some will say, “I don’t think 60-degree beam angle is large enough” or “What beam angle should I be using?.” The answer largely depends on the application in which you intend to use our lights but also hinges on your understanding of the definition “Beam Angle”.

Using the diagram in Figure 1 as an example you will notice that the center point of the lamp has a luminous intensity of 2000 and that the intensity fades on each side the further out you travel. When the luminous intensity reaches 50%, or in this case 1000, you mark those points and measure the angle between them.

Often times this information will be displayed on a polar graph. (Figure 2) A polar graph allows an engineer to assess whether the luminaire has a “narrow” or “broad” distribution, gauge its symmetry, and determine absolute or relative intensity on the light’s axis. Using Figure 2 as an example, the luminous intensity at the center of the lamp is roughly 2200. This particular lamp has a very narrow and focused distribution which is reflected in how drastically the intensity drops at 10 degrees. Many people misinterpret polar graphs as the actual “throw pattern” of the light when actually it just graphs the intensity change at different angles from the center. Understanding how to properly interpret polar graphs and beam angles are extremely helpful in determining the right product for the job!

If you have more questions on the science behind our SeaFire lights as well as understanding beam angles or graphs you can contact us here.