All About Marine Transmissions 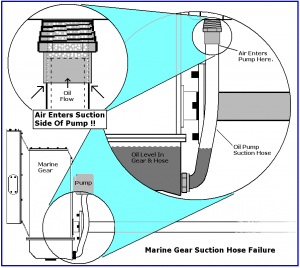 Marine Transmissions-Marine transmissions aren’t pretty and they don’t get much respect. They seem to be almost invisible when they’re working well. Like a kitchen appliance, such as a dishwasher or a refrigerator, no one spends much time thinking about these machines. At first thought marine gears don’t even seem as important as the coffee maker. They don’t roar like a brightly painted diesel engine at full speed, however, when they fail, your boat goes nowhere fast!

Originally many larger, low RPM marine engines were “direct-reversible” meaning that when it was time to go backwards, you stopped the diesel engine, reset the valves, and then started the engine rotating in the opposite direction. The propeller connected to this type of engine often turns the same speed as the engine. (This is called a 1:1 ratio between the revolutions of the engine and the revolutions of the propeller).

This was fine when engine RPMs were in the two or three hundred RPM range. However, when newer, smaller fishing vessels began to use high-speed engines, it resulted in the need for gear reduction to slow the number of propeller RPMs. Hence we have the name “reduction gear”. These early gears often had a mechanical clutch system as well.

Since most of these mechanically clutched units also had a reverse gear, so they also might also be called a “reverse-reduction gear”, a “reverse gear”, or a “reduction gear”! Later most gear makers switched to hydraulic clutches. This piece of equipment is now often referred to as the “transmission”, or as a “marine gear”, to distinguish them from automotive transmissions, or simply “THE GEAR”.

All Grunt No Glory-Turning a propeller is no small task and the marine transmission, in the course of powering the boat, has four other vital duties to perform:

1. The modern transmission provides a ″reverse″ capability for backing the boat and also for sudden emergency braking. 2. It reduces the propeller shaft speed to a speed range that is most efficient for the propeller. 3. Marine transmissions must be able to dissipate heat, both by radiation and through the oil supply to a heat exchanger. This heat is caused by friction inside the gear box. 4.The transmission transmits fore and aft thrust from the propeller to the boat. Just as the mast on a sailing vessel transmits the wind’s force on the sail to the vessel, the transmission transmits the propeller’s force to the vessel through the engine bed. The tranny does this while isolating the engine from the destructive power of the propeller’s thrust. If this thrust acted directly on the engine’s flywheel, it would immediately destroy the crankshaft’s main thrust bearing and cause engine failure.

Propeller thrust, even in a small boat can be considerable. For an example, a 16-foot seine skiff with a 130 horsepower, four-cylinder diesel engine can easily perform a bollard pull of three-thousand pounds. Bollard pull can be measured by a heavy-duty scale tied between the skiff and the dock. Bollard pull is defined as the pulling ability of a boat measured in pounds or tons exerted when the boat is tied to and pulling against an immovable object.

Gear Ratios-When a diesel engine turns at 2,000 revolutions per minute (RPM) and the propeller shaft turns at only 1,000 RPM there is a drive ratio through the marine gear of 2:1. Or put another way 2,000 RPM is going into the front of the gear but only 1,000 RPM comes out the back. This means that inside the tranny there is a pair of gears running together. From the ratio we can see that the driving gear (from the engine) must have half the number of teeth on it that the driven gear that drives the propeller shaft has.

Maintenance-“What filter?” the amazed (and forever anonymous) skipper gasped. “Your tranny has 22,000 hours on it and you haven’t changed the filter?” the mechanic asked. “Have you ever changed the oil?” “Once, three years ago,” was the reply. Checking the gear manual for the proper type of oil and the filter change interval for your tranny will point you in the right direction.

Beware of any suction leak that allows the tranny’s oil pump to pick-up air with the oil. Aerated oil will let you down because it will not protect the clutch discs, meshed gears or bearings inside! Suction leaks occur when the suction hose to the pump gets hard, becomes difficult to bend and cracks. When this happens, replace it.

Another warning on hoses has to do with the hoses running to the oil cooler. Be sure to reconnect the same ports on the tranny and oil cooler as when you change the hoses. Put another way: When changing oil cooler hoses, keep the oil flowing through the cooler in the same direction as it was before the hose change! The oil flow direction is important because contamination and debris sometimes will be caught on the upstream side of a cooler and may be released directly into the tranny if you change the direction of the oil flow through the cooler.

Of course, watch for oil leaks, but especially from the front end of the tranny. There are two possibilities for oil leaks in this area. Be sure to make the correct call between an engine rear crankshaft seal leak and, a gear front seal leak. To tell these two possible sources of leaks apart, just remember that transmission oil is always honey colored and is never black. Engine oil, on the other hand, is normally black. It is honey colored only following an oil change. The problem with an oil leak in this area is that the oil can deteriorate the “rubber” coupling that connects the input shaft of some gears to the engine flywheel. We will discuss these front couplings in detail later.

All That Glitters Is Not Gold-Many transmission oil pumps have a suction screen on the pump’s incoming oil supply line. This screen needs to be checked when you change the oil and filter or if your tranny has problems. It is not uncommon to find metallic ″fuzz″ consisting of very fine, short strands of metal in this screen in a new gear, or following a rebuild.Use caution when checking your screen because these strands are very sharp!

If you begin to see metal fuzz in the screen with a high number of operating hours, you need to check it further. The best way to do this is to remove the filter and cut it open to inspect for metallic ″glitter″ that indicates more serious trouble than just fuzz in the screen.

“Glitter” is composed of small chunks of recently destroyed machinery and indicates your tranny is on the way out if it is not already gone. With glitter you will often see the lubricating oil take on an appearance like metallic paint. Glitter is self-perpetuating, that is, when the metallic particles start flowing through a gearbox, they run through the gears and bearings and generate even more damage.

Always monitor oil temperature and pressure as you operate the boat. Some trannys have lower pressure in neutral than when they are in gear. If so, always wait to increase the throttle setting until sufficient drive pressure comes up on your gauge to show the gear is fully engaged.

The Get-Home Screws-Several marine gear makers, including ZF, provide “get-home screws” as a means to keep going if a clutch pack fails. Check your manual or ask your distributor to show you how to activate the ″get-home″ feature before you need to use it to crawl back to port.

Locking the Shaft-If your vessel must be towed, be sure to stop the propeller shaft from turning. One good way is to hang a pipe wrench on the propeller shaft. Just wrap an old leather glove around the shaft and hang the wrench over the glove. Otherwise, when the shaft turns from the rear with the engine turned off, it will not lubricate the marine gear. This is because the gear’s lube pump is powered by the transmission’s input shaft. The same thing is true if the engine is turned off and the propeller is spinning from water movement. All output related shafts, bearings, and both of the clutch packs, will turn without lubrication and with disastrous results. Locking the shaft is also a good idea when you anchor the boat in a river or it is tied to a dock where a strong current is running.

Couplings, Front and Rear-Each marine transmission has one coupling at the front and one at the rear. They are alike in name only. The coupling between the engine and the marine gear is designed to be flexible enough to absorb rotating impulses of torque coming from the engine. However, these front couplings are not designed to absorb any fore and aft thrust.

Flexible front couplings are often made of a combination of steel discs and springs to absorb torque. They also can be made of a rubber-like compound that absorbs vibrations coming from the firing impulses that all engines make. These rotary vibrations are called torsional vibrations. As previously mentioned, an oil leak between the engine and the gear will seriously weaken a rubber coupling and cause it to fail.

Output shaft couplings for trannys, on the other hand, usually come installed from the factory, with rigid couplings designed to take both a small amount of torsional vibration and a huge amount of propeller thrust.

Flexible couplings for the output end of the marine gear are available and do have their place. Lighter, high-speed boats with high propeller shaft speeds benefit from a flexible output shaft coupling. They are often used on lobster boats which are very light vessels with much higher power levels than other work boats in their weight class. The lobster boats have planing hulls and use a 2:1 gear reduction ratio that provides for a high propeller speed. These applications respond nicely to the flexible output shaft couplings.

Trolling Valves-Sometimes the need arises to go slower than the vessel travels in gear at its lowest engine RPM. Because of this, many marine transmissions have provision for a trolling valve. The trolling valves can be added to many transmissions after the sale.

Maintenance-While marine gears don’t need an elaborate paint job or a chrome dipstick, they do require care now and then. Good oil and hoses, and a clean filter will keep you ready to roll.